The Temple is Defiled:

The Abomination of Desolation

Shortly after Zerubbabel started rebuilding the Temple, Daniel had his fifth and final vision.

In this vision, God showed him the wars and succession of kings in the Persian, Greek and Roman empires.  The details were so accurate; some Bible historians insist Daniel was written in 165 BC.

The “he” being referred to in this portion is the one who has several names:

The “Holy Covenant” refers to the Covenant God made through Moses.

“At the appointed time he shall return and go toward the south; but it shall not be like the former or the latter.  For ships from Cyprus shall come against him; therefore he shall be grieved, and return in rage against the holy covenant, and do damage.

“So he shall return and show regard for those who forsake the holy covenant.  And forces shall be mustered by him, and they shall defile the sanctuary fortress; then they shall take away the daily sacrifices, and place there the abomination of desolation.

Those who do wickedly against the covenant he shall corrupt with flattery; but the people who know their God shall be strong, and carry out great exploits.

This prophesy was partially fulfilled by Antiochus IV, king of the Hellenistic Seleucid kingdom who rabidly persecuted the Jews and defiled the Temple by erecting a statue of Zeus (the abomination of desolation) and sacrificing pigs on the great altar.

The faithful remnant declared war and thus began the war of the Maccabees from 165-163BC.

The miraculous victory over the mighty Greek army and the rededication of the Temple has been memorialized by the holiday Hanukkah.

PRAY THE JEWISH PEOPLE WILL READ THE PROPHESIES OF DANIEL AND RECOGNIZE THE DANGER COMING. 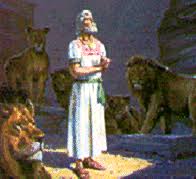