God is faithful to His character and to His promises.  Israel was taken into captivity, but God promised that after 70 years of exile, He would bring them back to their land.  God worked through King Cyrus of Persia to issue the command to rebuild the Temple.  Amazingly, the prophet Daniel based his end times prophesy on the date of this command: 445 BC

“All the kingdoms of the earth the Lord God of heaven has given me. And He has commanded me to build Him a house at Jerusalem which is in Judah.

Who is among you of all His people? May his God be with him, and let him go up to Jerusalem which is in Judah, and build the house of the Lord God of Israel (He is God), which is in Jerusalem.

And whoever is left in any place where he dwells, let the men of his place help him with silver and gold, with goods and livestock, besides the freewill offerings for the house of God which is in Jerusalem.

The first step in the project was to build the altar so that sacrifices could begin.  Just in time, the people were able to celebrate the Feast of Tabernacles; celebrating the feasts was and continues to be a reflection of God’s unique relationship with the Jewish people.

Though fear had come upon them because of the people of those countries, they set the altar on its bases; and they offered burnt offerings on it to the Lord, both the morning and evening burnt offerings.

They also kept the Feast of Tabernacles, as it is written, and offered the daily burnt offerings in the number required by ordinance for each day.

Afterwards they offered the regular burnt offering, and those for New Moons and for all the appointed feasts of the Lord that were consecrated, and those of everyone who willingly offered a freewill offering to the Lord.

From the first day of the seventh month they began to offer burnt offerings to the Lord, although the foundation of the temple of the Lord had not been laid.

So the elders of the Jews built, and they prospered through the prophesying of Haggai the prophet and Zechariah the son of Iddo.

Now the temple was finished on the third day of the month of Adar, which was in the sixth year of the reign of King Darius.  Then the children of Israel, the priests and the Levites and the rest of the descendants of the captivity, celebrated the dedication of this house of God with joy.

PRAY FOR THOSE WHOM GOD CHOOSES TO FULFILL HIS PLANS AND PURPOSES. 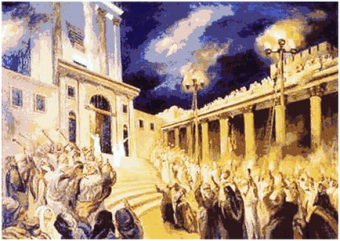