Even today the nations are arguing about who should possess the land. The answer today is the same as it was then…the land belongs to the Lord God of Israel.  He decides who will possess it.

Now Jephthah sent messengers to the king of the people of Ammon, saying, “What do you have against me, that you have come to fight against me in my land?”

And the king of the people of Ammon answered the messengers of Jephthah, “Because Israel took away my land when they came up out of Egypt, from the Arnon as far as the Jabbok, and to the Jordan. Now therefore, restore those lands peaceably.”

So Jepththah reminds Ammon of Israel’s repeated request to pass through neighboring lands which was consistently refused.

[And] Sihon did not trust Israel to pass through his territory. So Sihon gathered all his people together, encamped in Jahaz, and fought against Israel. And the Lord God of Israel delivered Sihon and all his people into the hand of Israel, and they defeated them.

PRAY THAT ISRAEL WILL POSSESS AND STEWARD THE LAND FOR GOD’S GLORY.

The ruins of King Ahab’s palace at Samaria. He apparently used many ivory and gold inlays. 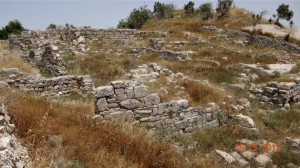