Now the children of Israel had done according to the word of Moses, and they had asked from the Egyptians articles of silver, articles of gold, and clothing. And the Lord had given the people favor in the sight of the Egyptians, so that they granted them what they requested. Thus they plundered the Egyptians.

Not only did God give Israel freedom, He also gave them the wealth of Egypt!  Egypt had refused to worship God, yet now it was their wealth that built His Tabernacle.

But now Christ is risen from the dead, and has become the firstfruits of those who have fallen asleep.

Behold, I tell you a mystery: We shall not all sleep, but we shall all be changed—in a moment, in the twinkling of an eye, at the last trumpet. For the trumpet will sound, and the dead will be raised incorruptible, and we shall be changed. For this corruptible must put on in-corruption, and this mortal must put on immortality. So when this corruptible has put on in-corruption, and this mortal has put on immortality, then shall be brought to pass the saying that is written: “Death is swallowed up in victory.”

PRAY FOR ISRAEL TO UNDERSTAND YESHUA’S DELIVERANCE FROM THE FEAR OF DEATH. 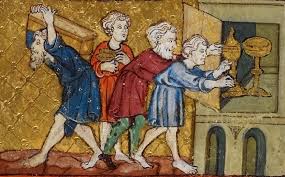